Australia’s household debt is among the highest in the world and rising, thanks largely to worsening housing affordability and plentiful consumer credit. So how do we measure up and should we be worried?

Most global comparisons measure total household debt as a percentage of net income. At last count, Australia’s household debt to income was 213 per cent, the fifth highest in the developed world according to the OECD.i

Debt is not necessarily bad if it’s used to grow wealth and you have enough income to service your loans. After all, borrowing to buy a home has been the cornerstone of wealth creation and financial security for generations of Australians. Borrowing to invest in assets such as shares and property that repay you over the long term, rather than the reverse, is also regarded as good debt.

Bad debt arises when you borrow to pay for things that don’t provide a financial return and that you probably couldn’t otherwise afford, such as that overseas holiday you paid for with your credit card. Unless you can afford to repay the debt in full when you get home, the debt can blow out and linger for years.

Most people take on debt in the expectation that the assets they buy will grow in value and their income will increase over time, reducing their debt burden. But what if these expectations aren’t met?

Wages not keeping up

Australian household debt has increased by 83 per cent in a decade, but our incomes aren’t keeping up. Over the same period average household income increased just 38 per cent.iiWages growth has been stuck at or near 20-year lows since 2015. It’s currently tracking at around 2.1 per cent, barely above inflation of 1.9 per cent and half what it was a decade ago. 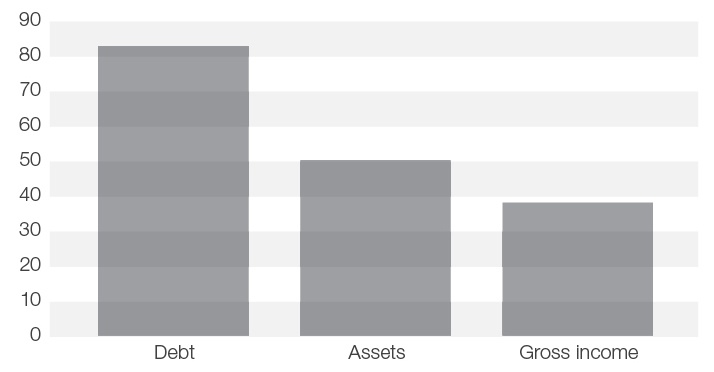 Households are generally considered to be under financial stress when their mortgage repayments or rent account for more than 30 per cent of their income. In the December 2017 quarter, it took 31.6 per cent of the median family income to meet average loan repayments and 25.8 of median income for median rent payments.iiiAnd despite a cooling property market, housing affordability continues to worsen.

Despite this, most of us muddle through, paying our bills and trying to save a little extra to get ahead. But even good debt can turn bad if you’re not careful or your finances take a turn for the worse. Households with high debt are more vulnerable to financial setbacks such as unemployment or a large fall in house prices that could leave them owing more than their property is worth.

In a recent speech, Reserve Bank Assistant Governor, Michele Bullock said the more debt households have the more sensitive their cash flow is likely to be when interest rates begin to rise, which is tipped to be within the next 12 months.

So while interest rates remain low, now is the time to take control of your finances and get on top of debt.

Tips for dealing with debt

Australia’s household debt may be high by global standards, but that only becomes a problem if you are struggling to meet repayments or sinking good money into bad debts. If you would like to discuss a debt reduction strategy, don’t hesitate to call.