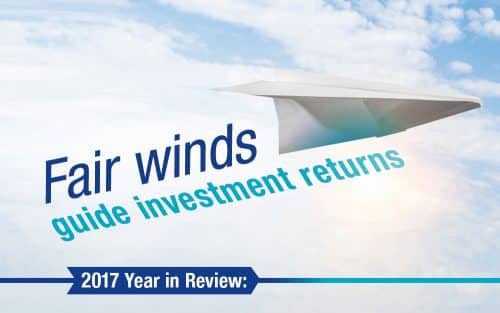 Investors had plenty to smile about in 2017, despite a world of worries on the geopolitical stage from the Middle East to North Korea and the South China Sea. The global economy continued its steady improvement and financial markets produced some excellent returns.

The year began with the inauguration of President Donald Trump, whose populist policies on issues such as trade and energy have impacted the global economic agenda. As the year closed the Trump administration’s corporate tax cuts were approved by Congress, which should boost the US economy.

The US Federal Reserve lifted its benchmark interest rate three times in 2017 with more expected this year as the economy strengthens. Higher rates could trim the sails of US equities while putting upward pressure on global bond rates and the US dollar.

The global economy grew steadily throughout 2017 with the US and other G7 leading industrial nations posting growth of around 2.2 per cent.

China’s growth has slowed, but at 6.8 per cent it’s still a global powerhouse and a major customer for Australia’s natural resources, education and other goods and services.i China now accounts for 36.7 per cent of Australia’s exports, more than any other country.ii

Australia’s economy grew by 2.8 per cent in the year to September, marking 26 years without a recession. The biggest contributor was private sector investment as business profits posted their strongest gains in 15 years. Low interest rates and low inflation of 1.8 per cent remain supportive for business and consumers. Unemployment fell to 5.4 per cent, the lowest jobless rate in four years, but sluggish wage growth remains an issue for the Reserve Bank.iii A jump in consumer confidence in December to 103.3 on the Westpac Melbourne Institute scale – anything above 100 is viewed as optimism – was good news for retailers leading into Christmas.iv

The Australian dollar finished the year at US78c, up 8.6 per cent due mostly to strong commodity prices. The dollar firmed despite a lack of movement on the local interest rate front. The cash rate held steady at 1.5 per cent all year while interest rates on government 10-year bonds fell from 2.77 per cent to 2.64 per cent.v The consensus is that the next interest rate move will be up although perhaps not until the end of 2018 at the earliest.

The shooting star award of 2017 goes to Bitcoin. The value of one Bitcoin soared from $1300 in January to more than $22,000 in December before dropping to around $17,000 at year’s end. The question as to whether it’s a 21st century tulip bubble or a new paradigm has been exercising minds from the world’s central banks to the local pub.

Shares surprise on the upside

US shares rose to record highs, up 19 per cent partly in response to the weak US dollar. The greenback has remained lower for longer than expected due to stubbornly low inflation and the long delay in lifting interest rates. The low dollar and Brexit uncertainty were a drag on the UK market, but it still managed a 7 per cent lift. Eurozone leaders Germany and France posted gains of 12 per cent and 9 per cent respectively. Asian and emerging market shares were also among the top performers, with the Japanese market up 19 per cent.vii

The residential property boom ran out of steam in 2017, as tighter lending criteria and higher interest rates for investors began to bite while state government incentives encouraged first home buyers back into the market.

Most observers predict subdued growth rather than a market bust in the year ahead.

There is every reason for cautious optimism in the year ahead, although there are risks too. Continuing investigations into Donald Trump could destabilise his leadership and global markets, while closer to home the Reserve Bank is keeping a watchful eye on wages, inflation, the Aussie dollar and property prices.

Even so, local economic growth is on track, interest rates are likely to remain low for some time yet and first home buyers have their best chance in years to get a toehold in the market. Australian shares look fair value although global equities are likely to continue to provide higher returns.