Australian motorists are not the only ones hoping that global oil prices have peaked after reaching four-year highs in 2018. Not only do high oil prices flow through to the price of petrol at your local service station, but they also increase the cost of doing business for everyone from farmers to airlines and push up the cost of living for households.

On June 22 the Organisation of Petroleum Exporting Countries (OPEC) plus Russia agreed to increase output by one million barrels a day, or about 1 per cent of world supplies, to relieve global shortages and lower oil prices. The price of Brent Crude rose to US$75.60 a barrel immediately after the announcement amid concerns the target may not be met. As at June 29, the oil price had surged 64 per cent in 12 months (see graph), but if OPEC and Russia succeed in lifting supply prices should begin to fall.

There are several international oil prices quoted in the media, including West Texas Intermediate (WTI), Brent, Tapis and Dubai crude oil, but the price of Brent Crude is considered the major global benchmark. Oil produced in Europe, Africa and the Middle East tends to be priced relative to Brent Crude which is sourced from the North Sea.

OPEC’s latest turnaround follows four years of determined efforts to limit oil production and boost prices. The price of Brent Crude crashed from US$115 to US$30 a barrel in 2014 as cash-strapped producers including Russia and Venezuela increased supply. At the same time, the US expanded production from fracking.

Then early this year the Complimentaryzing northern hemisphere winter pushed up the price of oil as demand spiralled. Brent Crude was trading at a sustained high of around US$80 a barrel until May, when US President Donald Trump withdrew from the Iran nuclear deal.

Under the 2015 deal, nations including the US, France, Britain, Russia, Germany and China agreed to lift international sanctions on Iran’s oil exports in return for OPEC’s third largest producer winding back its nuclear capability.

The prospect of renewed US sanctions against Iran raised concerns that the global supply of oil would be squeezed, putting upward pressure on prices. At the same time, the US threatened sanctions against Venezuela following its disputed Presidential election, a move that would further reduce OPEC output.

The first sign that oil prices may have peaked came on news that Saudi Arabia and Russia were discussing a possible increase in oil production. In late May the price of Brent crude eased back to levels around US$76 a barrel before settling at US$77 after the June 22 meeting sealed the deal. 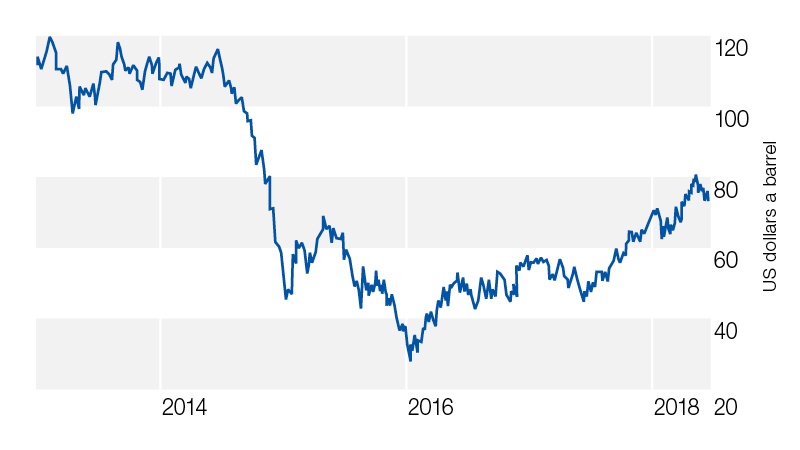 Holidaymakers may feel the pinch after Qantas chief executive, Alan Joyce warned airfares could rise in response to this year’s oil price hikes. His comments came after the International Air Travel Association forecast the average cost of Brent Crude would be US$70 a barrel in 2018, 27 per cent higher than 2017 (US$55 a barrel) and 16 per cent higher than its own forecasts.(i)

Jet fuel costs have climbed 50 per cent in the past 12 months which will eat into airline profits, depending on how much of the cost they are prepared to absorb before lifting fares.(ii)

Rising oil prices also erode profits of transport companies and businesses that rely on the movement of goods or the use of heavy machinery. Australian farmers face the double-whammy of rising fuel costs on top of the effects of drought.

Consumers ultimately pay for higher oil prices as they flow through to the cost of food and other goods. This has raised concerns about the impact on inflation globally at a time when countries including the US, UK and Canada are already increasing interest rates.

There are some winners from constrained oil exports though. Australian gas producers stand to gain from increasing demand and high prices as they ramp up production and exports.

Relief ahead for motorists

Rising oil prices have inevitably been passed on to local motorists, although there is relief in sight. The national average price of unleaded petrol rose by 14.7 per cent in the three months to June to a four-year high of 153.3c a litre. Prices edged lower towards the end of June in response to the downward trend in crude oil prices.(iii)

Local retail fuel prices are determined by the price of Singapore unleaded petrol (Singapore is the most important oil trading and refining centre in the Asia-Pacific region), as well as the exchange rate. Rising oil prices have been exacerbated by the weaker Aussie dollar which has fallen from US81c earlier this year to recent levels below US74c.

Petrol prices vary enormously between regions, cities and even within suburbs. Australian Competition and Consumer Commission chairman, Rod Sims has urged motorists to use fuel price websites and apps to shop around (you could try MotorMouth or Compare the Market.)iii Sound advice at any time, not just when prices are rising.(iv)

If you would like to discuss this article in light of your investment strategy, give us a call.

iii Australian Institute of Petroleum as at June 24, 2018, https://aip.com.au/pricing/pump-prices